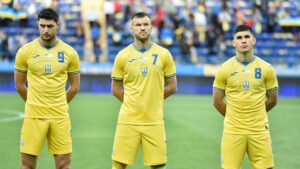 Andriy Yarmolenko has returned to training at Rush Green today after David Moyes granted him compassionate leave in the midst of the crisis engulfing his home country of Ukraine.

The Eastern European country was invaded by Russian forces last Thursday, quickly advancing on the northern city of Chernihiv, where the West Ham United player grew up, and a number of other large population centres, including the capital Kyiv, where Yarmolenko played for the country’s leading club Dynamo for a decade.

On Friday, Moyes revealed the No7 had requested and been granted time off, but the forward has made the voluntary decision to return to Rush Green and train with his teammates on Monday.

However, the manager said in his pre-match press conference that the 32-year-old will not be rushed back into competitive action.