Zaba set for a final challenge 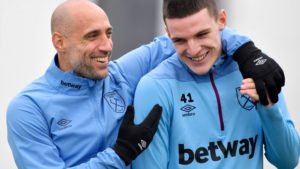 Pablo Zabaleta is ready for another return to Premier League action following the devastating injury to Ryan Fredericks which looks set to keep him out of action possibly until the end of the season.

It means the 35 year old could notch up as many as 342 PL appearances during an illustrious career and although he would have preferred to go out with something other than a relegation battle he will inevitably rise to another big challenge.

ClaretandHugh was the first to bring the news that Fredericks would be out for a long stretch after breaking a bone in his shoulder and that he looked destined for surgery that would keep him out for months rather than weeks.

And with Ben Johnson still recovering from injury it look more than unlikely that the manager will throw Jeremy Ngakia into a fierce relegation fight as a pre-cursor to a career in the game.

Whatever happens, Zaba is up for it and as ever promising to his absolute best as the Irons fight for their Premier League lives.

And speaking at https://www.whufc.com/news/articles/2020/february/22-february/pablo-zabaleta-i-will-try-give-my-best-every-time-i-play Zaba said: “Unfortunately, we lost a huge player in Ryan with his pace and all that, and Ben Johnson has had an injury, so I’m the only one in this position at the moment.

“We’ve got 12 games left between now and the end of the season and if I am involved in all of the games, I will try to give my best.”

Another player who always gives his best for the Claret and Blue cause is central midfielder Declan Rice, whose outstanding commitment has not been rewarded with the results it warranted in recent weeks.

And Zaba added: “I always say, since the first day I came to West Ham, I think that Dec is one of the most-talented British players around.

“He’s been good for us in the last two years. We’re not in the position we would like to be, but I think he has got great potential.

“He loves West Ham. He’s been here for so long and he came through the Academy so he loves West Ham and you can see in his celebrations when we score that he feels a lot of passion for this club.”

One comment on “Zaba set for a final challenge”