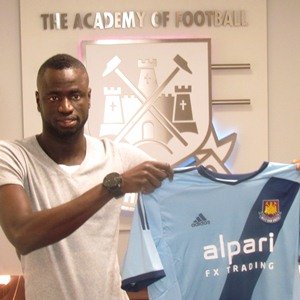 Hammers new boy Cheikhou Kouyaté  has been bought as a powerful midfield presence to play alongside Mark Noble.

Billed as a central defender it seems however, that Winston Reid, James Collins and James Tomkins shouldn’t be in fear of their places.

ClaretandHugh has today been talking to Anderlecht club sources who have told us that our £7 million has bought a guy who is far better in the middle of the park than at the back.

One said: “He’s prone to the odd defensive error but he can certainly play back there. However, in the middle he’s a seriously effective player.

“We’d be surprised if he’s not used there primarily because I think it’s reasonable to say that’s where he’s really been at his best for Anderlecht.”

Another told us: “He was a massive part of the team that  won the Belgium Pro League last season through the play offs where he scored his only goal of the season.”

The signing appears to suggest that Mohamed Diame will be under real pressure this season after complaining regularly to the media he wants a top four club.

Co-chairman David Gold – talking about the new signing to ClaretandHugh – explained: “We have bought a very good player who can perform in the middle and at the back.

“Our policy is to get pressure in all positions and in  Cheikhou we have a very versatile performer at a brilliant price.”

2 comments on “Anderlecht mark our cards: Kouyate for midfield!”