Armero deal “in his own hands” 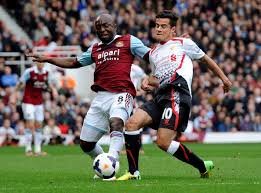 Pablo Armero has been assured there’s a deal waiting for him at the club …and his Boleyn future is in his own hands.

Armero looked very much a player for the Hammers future against Liverpool at the weekend and has spoken today of his desire to land a permanent deal with the club.

He said – as he approached the last games of the campaign: ”  I would like to have a good end so in the future have a new contract with the team.”

And ClaretandHugh has learned that the Colombian international is now set for an extended run in the team as boss Sam Allardyce looks to find a long term replacement for George McCartney  who hits 33 year this year and is out of contract at the end of the season.

The Irons would like to keep the player on a reduced contract and hope that Armero – who is available at around £3 million from Napoli – will prove to be worthy of a deal.

A well placed source at The Boleyn – speaking exclusively to  ClaretandHugh exclusively believes that he has every chance of being offered a deal.

He said: “He has impressed both at Sunderland in the game we won 2-1 and against Liverpool.

“He is exciting and adventurous whilst being able to provide defensive cover. Hopefully he will show enough over the next few weeks to land that deal – it’s in his hands. “