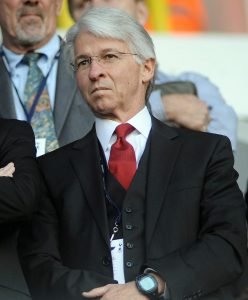 West Ham is looking at the possibility of landing former Arsenal director of football Dick Law to become take over the role vacated by sacked Tony Henry.

Co-chairman David Sullivan has promised to step back from transfers and Law is one of the front-runners to get the job.

However, no decision will be made until the club are certain which level they will be playing at next season!

American Law is one of the most experienced men in that role in the Premier League. having joined Arsenal’s executive team in 2009.

He previously acted as a long-standing consultant with Arsenal’s scouting operation in South and Central America and helped bring Gilberto Silva and Carlos Vela to the North London club.  He is trilingual speaking both Spanish and Portuguese.

Former Barcelona chief Raul Sanllehi joined Arsenal last month to head up player recruitment and Law has temporarily stayed on as a consultant until the summer.

Law previously said last year he wanted to retire to be with his family in America but his willingness to stay on in London short term might give West Ham hope that he could be open to a new challenge in East London as their new director of football.

One comment on “Arsenal man touted as Irons director of football”