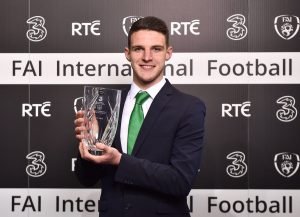 Hammers Josh Cullen and Declan Rice have been named Republic of Ireland players of the year last night.

Elsewhere, former Hammer Sean Maguire was named as SSE Airtricity League Player of the Year, with the 23-year-old playing a crucial0 role in the Rebels’ League win before leaving to join Championship side Preston North End. The striker who was released by West Ham in 2015 has scored 9 goals in 17 games for the Championship side with 3 assists, one goal below Jordan Hugill who joined West Ham in the opposite direction in January. 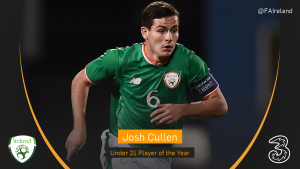 The FAI International Awards took place in RTÉ Studios in Ireland as it was broadcast live on TV.

Rice wrote on his Twitter page “Honoured to have won u19 player of the year! Cannot wait for my first trip with the senior team”

Rice has been called up to the Ireland squad for the friendly clash with Turkey on March 23rd where he is expected to make his debut. The West Ham defender – who was born in London but is eligible for Ireland through his grandparents – has made it clear he wants to represent Ireland, despite interest from England.