Arsenal midfielder would be a good fit for Hammers 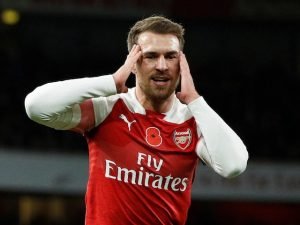 Aaron Ramsey will depart Arsenal for free at the end of the season after the club told him in person why he will not be offered a new contract.

The Wales midfielder is understood to have accepted this will be his last season at the club, having made 341 appearances and scored 59 goals since he joined from Cardiff City for just under £5m in 2008.  Lauren told Sky Sports News: “He wants to play. The club are looking at other ways but as a player you have to find your own way. If you don’t have the first-team shirt you have to go elsewhere. If I was him I would stay in London because he knows the city.

“Somewhere like West Ham would fit him. It would give him the leadership he needs and he is based in London so I think he has to stay at a London club.”

When I first heard this story I thought I don’t want a thirty-something Arsenal has-been at the club, Ramsey seems to have been around forever at Arsenal so I was utterly surprised to find out he is still only 27 years of age.

Ramsey is a box to box midfielder with an excellent dribble success rate, he performs his defensive duties diligently and is capable of driving from deep to turn defence into attack, while also being a threat in the final third and his average speed is still up there with the best.

Perhaps the most important stat, however, is the number of minutes spent on the pitch. The Welshman has regularly struggled with injuries in the past.  His recent injury record isn’t too bad after his horror leg break in 2010. He suffered from a small groin injury earlier this year which kept him out for one game and a hamstring injury this time last year kept him out for nine games.

Ramsey’s £110.000 per week wages means he would need to become one of West Ham’s top earners to join the Hammers and he is likely to want a massive signing on fee and a big fee for his agent in lieu of a transfer fee in the Summer.