Bilic: “We never said we were willing to sell Andy”

Posted by Sean Whetstone on January 7, 2016 in News, Whispers 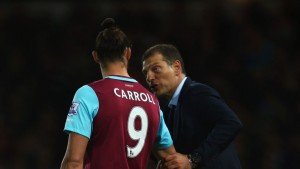 West Ham manager Slaven Bilic has told a pre match press conference this morning that West Ham have never said that they are willing to Andy Carroll and the rumours are related to his recent form with two goals in two games.

Bilic told the assembled press “We never said we were willing to sell Andy, not me, not the Chairman. He’s a very popular player…”

“Two goals in two games, the rumours start. The only way to stop the rumours is to play badly.”

“We do not want to sell him. I think he likes it here, he’s very important in the dressing room. I know he is happy here.”

“We did the majority of the work in the transfer market in the summer, we are in a good situation with players coming back.We coped well with the injury situation, but we don’t want to be in that position again. We are not going to be that active. We’re not going to buy just because we can. But if an exceptional deal comes available, then maybe.”

3 comments on “Bilic: “We never said we were willing to sell Andy””