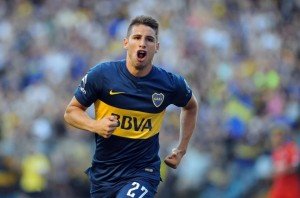 West Ham have again been linked this morning with interest in signing Argentinian striker Jonathon Calleri from Boca Juniors. Calleri is still a young striker who at the age of just 22 has made a real impact at Boca scoring 24 goals since his move their in July 2014.

The Boca striker has been also linked with Chelsea and Arsenal but now appears to be on the verge of joining Inter Milan according to club president Daniel Angelici.

“For Calleri we are asking for all of the documentation that UIF needs for the origin of money,” Angelici said. “The negotiations are very advanced and this week we will close the deal.”

Calleri helped Boca to a Primera Division title in 2015, scoring 10 times in 25 matches for the Argentine giants over the campaign.