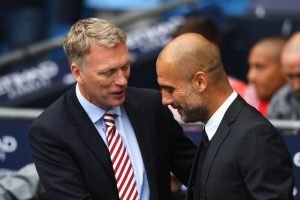 Bookmakers put West Ham at an unlikely 10/1 for a win over Manchester City this afternoon while a draw attracts a odds of 5/1.

The Premier League champions are odds-on at 3/10 to win at the London Stadium this afternoon after beating the Hammers an aggregate of 9-0 last year in East London at the former Olympic Stadium.

Manchester City have won all four competitive matches against the Hammers under Pep Guardiola. The Hammers have won only one of their 16 Premier League matches this season against teams currently in the top half of the table (D5, L10)

David Moyes lost just six of his 22 Premier League matches against Manchester City as Everton boss (W12, D4) – since leaving the Toffees, he has lost all five.

The Citizens are one win away from equalling Chelsea’s record of 30 victories in a single Premier League campaign, set last season.

One comment on “Bookies write off a West Ham win”