Bowen shows the way as Hammers win in style

This was a very different West Ham United and the difference to a large extent was a certain Jarrod Bowen!

Manager David Moyes handed him his first start and was rewarded with a 15th minute goal plus an all action performance where we saw a Hammer chase every lost cause and show the determination and desire that’s been missing all season. 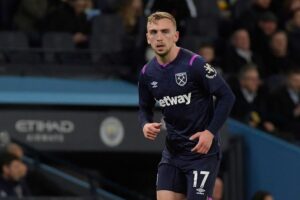 Bowen was superb on first start

It my well have rubbed off on the rest of the team in a big way as they created more chances and shots on goal than at any other time this season.

Bowen’s goal was equalised by Obafemi after half an hour but this newly invented Hammer outfit finished the Sainst off in style with goals from Haller and Antonio.

It was a performance in the real Hammers tradition and came after the superb effort of Monday night at Liverpool. If they carry on like this the team will have nothing to fear.

But make no mistake Bowen is holding the key and showing the way forward to a team that has needed a player like this for a very long time.

It was our first win since New Year’s Day, our first double and it lifted us out of the bottom three and into 16th place level on points with Bournemouth who drew with Chelsea  and a point behind Brighton – beaten by Palace.

Defensively we were fine and honourable mentions go to most of them buy specifically Jeremy Ngakia, Pablo Fornals, Issa Diop and Amgelo Ogbonna.

It was an absolute must win match and the boys rose to the challenge in a big way. At last we have the chance to start looking upwards if we can keen this sort of momentum going.