Celtic deny West Ham are in advanced talks for midfielder 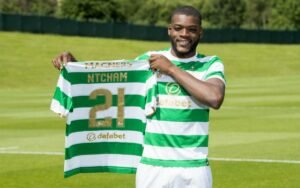 Transfer rumours of Olivier Ntcham being in advanced negotiations with West Ham have been shot down by Celtic this afternoon.

A report in France states that Celtic midfielder Olivier Ntcham is in “advanced negotiations” with the Hammers.

The former Manchester City  23-year-old youth has made 12 Scottish Premiership starts this season, and scoring the winner away to Lazio in the Europa League. French outlet Footmercato reported that Ntcham is in “advanced negotiations with West Ham” over a move before Friday’s transfer deadline.

West Ham this afternoon confirmed the signing of  Czech international Tomas Soucek from Slavia Prague, with the 24-year-old occupying a similar role to Ntcham.

David Moyes and the Hammers are known to be targeting a young right back and a striker before the transfer window slams shut on Friday so a second midfielder is unlikely.