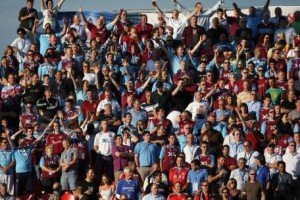 West Ham supporters are not expecting too much from this evening’s away game against Leicester City which kicks off at 7.30 tonight.
Nearly 60% of over 1,100 Claret and Hugh readers taking part in a poll believe the Foxes will win. Nearly 27% think can scrape a draw while just 13% say the Hammers can take all three points tonight.
Leicester have only lost one of their last 10 Premier League games against West Ham (W5, D4), a 2-0 home defeat in May 2018.  West Ham have won only twice in 10 Premier League away meetings (D4, L4).

This will be David Moyes’ 50th Premier League away game against a top-four team. He’s won just one of the previous 49 (D15, L33), a 2-1 victory with Everton at third-placed Manchester City in 2010.

West Ham have won only three of their 14 Premier League away fixtures under Moyes (D3, L8).

Sebastien Haller scored with three of his first seven shots in the Premier League but has been successful with just three of his subsequent 40 attempts.

One comment on “Confidence is low in Leicester City result”