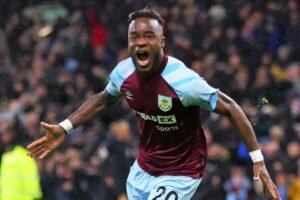 Maxwel Corney is set to have a scan on a suspected calf injury he sustained against Wolves..

The £17.6 million signing from Burnley had appeared to take a knock on the ankle but David Moyes believes it is explained after the gane that he believes it is more likely to be a calf injury,

Moyes said that the player had initially felt his calf, but the manager added he had not had the chance to discuss the problem with the medical staff.

He added that he wasn’t confirming that it was a calf strain but that it was certainly to do with that area rather than his ankle.

It obviously throws a doubt over whether he will be ready for the Anderlecht and Fulham games on Thursday and Sunday.