Crowd trouble – we will bring you the truth 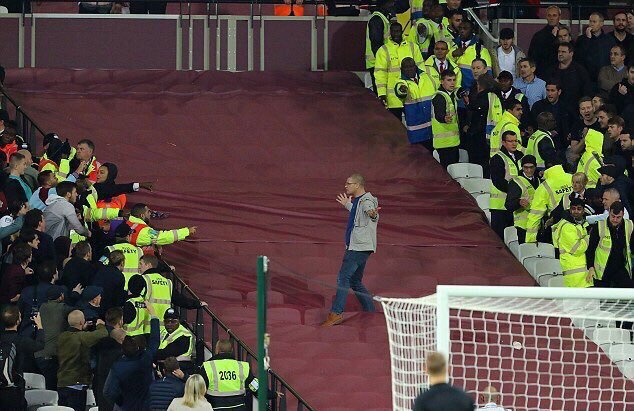 IS THIS HOW IT STARTED?
A CHELSEA FAN SOMEHOW EVADES STEWARDS AND MAKES HIS WAY TOWARDS THE IRONS SECTION BAITING THEM AS HE GOES BEFORE QUICKLY DOING AN ABOUT TURN AFTER THIS IMAGE WAS TAKEN. IDIOCY OF THE HIGHEST POSSIBLE ORDER.

West Ham are being put on trial by media who appear to have hung, drung and quartered us after crowd disturbances in the final few minutes  of a magnificent EDL Cup vitory over Chelsea last night (Wed).

But all many not be as it seems and later this morning Sean Whetstone our associate editor here at ClaretandHugh will bring his first hand of report, having been right at the centre of what is being described – ridiculously as an area turned into a “bomb site.”

Sean – representing ClaretandHugh – has been interviewed three or four times on BBC Radio so far today but will bring our readers precise details of how bad it really was – it wasn’t.

If the media – and mainly the red tops are going to try cruifying us – we at ClaretandHugh will give it to you as it actually was.

For the record we DO believe that any who were inolved in anyt throwing of ANY objects or becoming involved in the melee should be dealt with in the appropriate manner.

But what is being written about our great club is in many cases wrong and improper as Sean’s report will show later.

22 comments on “Crowd trouble – we will bring you the truth”