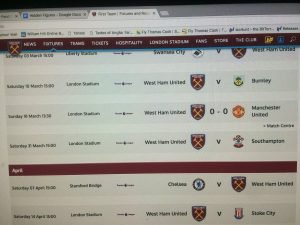 The Ribman wrote ‘David Gold is the Man United game on 18th March a full-time result?’

Other fans joined in suggesting ‘More lies from the Board?’

But Gold had the last laugh saying “No Mark it’s not the full time result, we go on and win the game with a over head scissor kick from Adrian in the last minute. dg”