Dembele warned that wink may come back to bite him 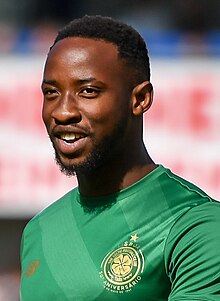 The  player was shamefully caught winking after managing to get Aaron Cresswell sent off in the first leg of the game but didn’t see his team  gain any big advantage as a result!

But on the basis perhaps that cheats never prosper,  the Hammers boss is claiming that he and his team could see things come back to bite them in France.

The wink was the same as that given by  Cristiano Ronaldo  against England at the 2006 World Cup following Wayne Rooney’s dismissal.

Dembele’s behaviour did his club and himself no good at all and there won’t be many who won’t want them beaten by a Hammers team who competed brilliantly with 10 men.

Moyes made it clear that the match was far from over and that the Hammers could put things right after the Dembele affair.

He said: “Sometimes you feel as if you can be hard done by and you just have to put it aside and get on with it. ‘This game has got a strange way of coming back to catch you, you just never know.

‘That’s why when you talk about people being down and reacting in certain ways, that can sometimes come back at different times in different ways.

‘Football has a strange way of coming back to get you.

‘You can see the action, you can see what happened. Unfortunately it happened and it didn’t help us.’