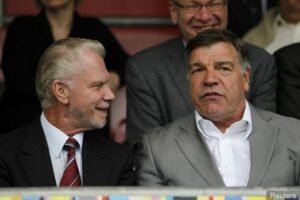 Chelsea were beaten 5-2 by West Brom yesterday leaving the door open for us to catapult over them into fourth place tomorrow night.

We mentioned this as soon as it happened realising the Irons had been offered a great opportunity by former boss Sam Allardyce’s outfit.

It was followed by a tweet from David Gold which simply said: @David Gold  Chelsea 2 West Brom. 5 Chelsea did have a player sent off but still hard to believe and leaves the door open for West Ham. dg

Perfectly reasonable, nothing controversial, just a fact and an encouraging situation as the Hammers head for Molineux.
Reasonable that is except for the Twitter hate brigade. It really does make you wonder what’s going on inside people’s heads when they have to scream abuse at the simplest observation which is of benefit to the Irons.
One wonders what else Gold would have been expected to say.
But  such behaviour also helps one understand why the likes of Thierry Henry have come off  Twitter and had Declan making it clear that the abuse is so often out of order.
We repeat: The Hammers have a better chance of making the top four with Chelsea having been beaten – GOOD!”
Gold says what everybody else is thinking and is attacked for it – pathetic!
Cue the protests and abuse.
Permalink