West Ham have zero concerns over Declan Rice’s commitment to the cause as the summer transfer window looms.

A top club insider has told ClaretandHugh that, despite there being links with other clubs, Declan is  focused on life at West Ham for the next 12 months minimum. 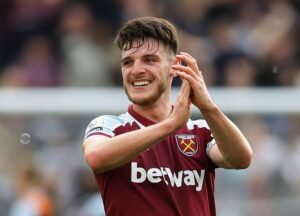 However, there is an acceptance, after on going talks, that Declan is desperate to win things and that if he can’t do that with us he will be looking to do so perhaps as early as next summer elsewhere.

Talks between the club, Declan and his agent/father Sean have been 100 per cent amicable.

The captain has informed the club outright that he has no plans to hand in any kind of transfer request and intends to give his all until his final day in a claret and blue shirt.

It is  realistic to believe that if the Hammers can’t give him the trophies he wants then he could be looking to move on next summer when with three years – including the year’s option left on his deal – his value would not reduce from around the £150 million the Hammers would want.

Both sides are entirely aware of that situation and are happy to see where things go over the next 12 months with the club desperately hoping we can win the trophies that will keep Dec at the club.

That has not caused any kind of rift, with Rice accepting the decision, and he has told the Irons that his focus is now on his football.

There have not been any bids tabled for Declan and the suitors are dwindling: Manchester City are set to buy Erling Haaland, Chelsea’s ownership situation is up in the air, and Manchester United may fail to qualify for Europe.

The Irons will subsequently spend the next year trying to convince Declan to stay at the club, with the Hammers willing to pay him in excess of £200,000-per-week.

If the worst-case scenario were to pan out and Rice were to leave next summer, the World Cup would actually increase his asking price – and the Hammers would negotiate in good faith with whoever were to come in with an offer, provided it met the value set by the board.

With the Irons set to spend in the summer – a kitty of £150m is available to David Moyes – the club are hopeful of more success next season, and Champions League qualification, both this season and next, could be decisive.

One comment on “Exclusive: Declan and Irons reach agreement on future”