David Moyes has hinted that he may well bring Alphonse Areola in to replace Lukasz Fabianski.

The Poland international has struggled for form and was dire against Arsenal last time out, conceding the second goal at an acute angle despite having plenty of time to see it coming. 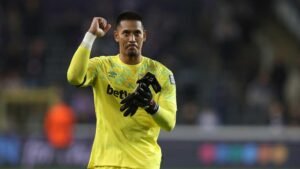 Moyes admits that Fabianski has struggled and has also acknowledged the form of Areola, who has excelled in Europe and was picked in France’s World Cup squad.

He told reporters: “When you have competition you cannot discount the other, and that’s Alphonse. He has actually been excellent playing in Europe. His performances have been great. He has probably been waiting there saying: ‘By the way, if people make mistakes then you need to make changes.’

“The thing about it is that Lukasz this season has been so, so good. he has very rarely… the one against Fulham he probably could have saved, and the one the other day [against Arsenal] and we think he should have saved that.

“But he will be aware he is under pressure as well, but that’s football. Whether it is the manager or the players you need to perform well or somebody will come in and take your position. We now have a few people in certain positions where we can make changes, try other things if they are not up to it.”