Fanimo remains out in Tranmere cold

Posted by Sean Whetstone on September 22, 2014 in Whispers 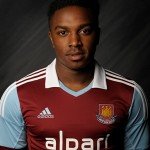 Hammers loanee Matthias Fanimo was an unused sub for a third consecutive game on Saturday as Tranmere lost to Exeter.

And despite having the speedy youngster on board it begins to look as though he may return to the Boleyn without a game.

With only two matches remaining between now and the end of his initial loan period, the player and the club must bewondering why manager Rob Edwards wanted him in the first place.

The player has made no comment although a red cross emoticon appeared on his twitter page on Saturday morning.

According to one Tranmere insider Rob Edwards claimed that Fanimo was carrying a slight hamstring injury when questioned about his absence this morning.

But he added: that didn’t stack up adding. ” Why name him on the bench then?” and added “He’s made a rapid recovery as he’s playing for the reserves against Morecambe as we speak”

One comment on “Fanimo remains out in Tranmere cold”