Former Hammer takes over at Reading 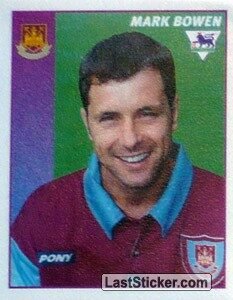 Former Hammer Mark Bowen has been named as the new manager of Championship club Reading.

Bowen signed on a free transfer for West Ham making his debut appearance on 21 August 1996 in a 1–1 home draw against Coventry City. He made 20 appearances for The Hammers in all competitions scoring only one goal in a 2–0 away win against Nottingham Forest on 21 September 1996. In 1997 his contract with Irons finished and he signed for Shimizu S-Pulse in Japan, again on a free transfer.

Bowen began his coaching career while at Reading under Mark Hughes who made him a member of his coaching staff for the Welsh national side. He then linked up with former Norwich teammate Steve Bruce at Crystal Palace and then at Birmingham City in his backroom team.

In 2019, Bowen was hired as a technical consultant for Reading and was later appointed the club’s sporting director on August 2019.