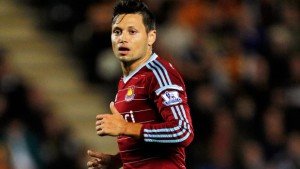 The 32-year-old former West Ham striker is currently with Boca Juniors who he joined in 2018.

While at West Ham he was loaned to QPR before being sold to Florentina for £2.1m in 2016.

Florentina sold him on the Watford for £2.75m in 2017 where he was loaned out to Al-Nasr in Dubai and then Vélez Sarsfield before being sold by Watford to Boca Juniors for £2.1m last year.

The move by LA Galaxy is seen as a replacement for MLS team’s superstar Zlatan Ibrahimovic who is likely to go back to Europe at the end of his contract.

Ibrahimovic’s contract with Los Angeles Galaxy is set to expire at the end of the year, and rumours have been rife regarding the 38-year-old’s possible next club.

Mauro Zarate made 29 appearances for the Hammers scoring seven goals between 2014-2016.