Posted by Sean Whetstone on September 24, 2014 in News 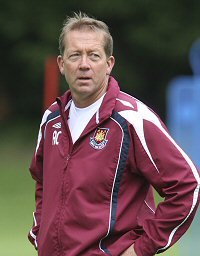 Curbishley was sacked as the club’s technical director in February after just two months in post following the arrival of Felix Magath as their new manager.

It had been rumoured Curbishley could return as manager with Symons as his assistant had Magath been sacked after relegation last season.

Former Hammers manager Gianfranco Zola has also been linked with the vacant managers position at  Fulham.

Another name with Hammers connection to throw his name in the ring is former assistant manager Steve Clark.

Alan Curbishley made 85 appearances in a West Ham shirt between 1975 and 1979 scoring 5 goals, he returned in 2006 to manage the Hammers for  71  games over two years before resigning in September 2008 claiming constructive dismal.  In in 2009 he won his case and West Ham were forced to pay him £2.2 million in compensation.

Zola’s reign as Hammers manager lasted 80 games between 2008 and 2010 when his contract was terminated after reaching a compensation settlement with Zola.