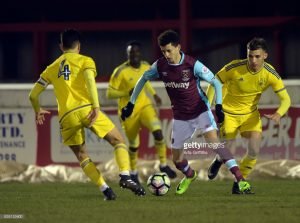 Nathan Holland on the run.

Young West Ham star Nathan Holland is set to return from injury for the next under 23 match against Swansea on October 22.

The flying winger has been missing with an ankle injury for the past month but is now ready to make his comeback for the team which has been struggling with results after losing players to injury and first team training.

Holland is currently included with the first team too and has a place reserved in the dressing room but he will need to be involved in under 23 games now he’s fit again.

The team has now suffered three league defeats on the trot in Premier League 2 Division One but four of the regular first team who have been injured are due to return for a behind-closed-doors match this week ahead of the Swans fixture.

Moses Makasi, Vashon Neufville, Daniel Kemp and Josh Pask will all be involved as they prepare to help lift the team away from the wrong end of the table.

However, the news isn’t as good on Portuguese striker Xande Silva who is expected to be out for at least another month.