‘Free agent’ Elliott may be on his way 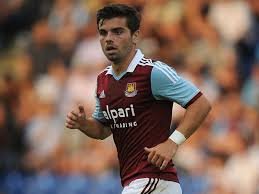 Young Elliott Lee looks likely to be on his way from Upton Park in the summer.

Despite grabbing eight goals in 13 matches for the U-21 Development Squad, the youngster has been unable to force his way into the first team squad.

And reports are now suggesting that with a number of  clubs are actively monitoring his situation it’s very possible he will not sign a new Hammers deal.

The young striker is in the final year of his current contract and insiders today confirmed to ClaretandHugh that reports negotiations with the player have stalled are correct.

And unless he can become convinced that he will have a genuine chance of making progress at the club he will almost certainly be on his way  with a transfer fee being set by the Professional Football Compensation Committee (PFCC).

We hope that can be avoided but can’t help being reminded that another prized former young striker  Robert Hall,  ran down his Hammers deal and then joined Bolton Wanderers, with the fee set at £450,00.

Our source explained: “Like all young players Elliott is a young man in a hurry and obviously can’t afford to let things pass him by.

“Hopefully this can be sorted out because he is a player of real promise.”