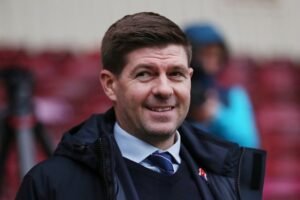 Declan Rice was singled out – not for the first time by an opposition manager – as being “superb” after yesterday’s victory over Aston Villa.

Steven Gerrard also accepted that the Hammers had more about them than the midland outfit as another important win over an in-form side saw us hold onto sixth place.

Gerrard knows a thing or two about top midfield play and could not have been more impressed with our skipper whose days as a Hammer may well be lengthened in the summer when the Hammers prepare to offer him an increase on the biggest contract they have already made top a player in their history.

And after the game the villa boss took no time at all in showing his admiration for Dec and the Hammers side.

He said: “I was impressed by West Ham in terms of how they looked on the pitch. I thought Declan Rice was superb today.

“The game plan from the beginning was to try and get around their two midfielders to stop them switching the play and dictating what a lot of West Ham were trying to do.

“Listen, (Rice) put in a strong performance and I was impressed by him.

“But we need more profile in our team, stature. Looking at both teams, there’s a few areas where I thought West Ham had a bit more on than us.

“I don’t think they did technically, in possession or creativity, but in terms of stature. How they defend, i.e. set plays and crosses, I think there was a gap today.”