Ginge wants to stay in London 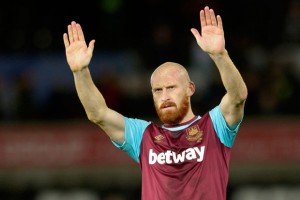 James Collins hopes to stay in London when his contract with West Ham ends this summer. The chances of a contract extension appear to be fading and even a six-month extension looks unlikely as it stands unless he is prepared to sign up for a pay as you play deal.

Ginge is said to be settled in the capital and therefore a bid from a London based Championship team such as Fulham, Millwall, Brentford or QPR is a possibility or possibly Charlton Athletic in League One.  Brighton showed interest in January but it remains to be seen if the interest holds up this summer for the 34-year-old who will turn 35 at the start of the next season.

← Zaba names a Hammers key player
“Nope, I’m not the Irons next director of football!” →
Click Here for Comments >

One comment on “Ginge wants to stay in London”