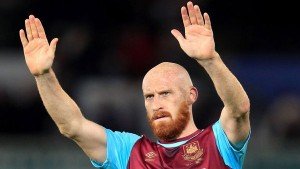 Tony Pulis has reportedly contacted James Collins over his availability to join him at Middlesborough.

Pullis is eager to overhaul Boro’s squad this summer and he believes 34-year-old Collins would fit the bill as his experience would be invaluable in the Championship.

It remains to be seen if the ‘Ginger Pele’ would be willing to move North East at this point of his career and uproot his family.

In May West Ham confirmed that James Collins will leave the Club when his contract expires on 30 June. Collins will depart having made 214 appearances across two spells spanning ten seasons in Claret and Blue.

The centre-half, who turns 35 in August, initially joined the Hammers from Cardiff City alongside close friend Danny Gabbidon in July 2005, making his debut in a League Cup second-round victory at Sheffield Wednesday in September of the same year. He initially spent four years in east London before moving to Aston Villa.

The former Wales international returned to West Ham in the summer of 2012 and established himself as a regular starter under Sam Allardyce following the Club’s promotion to the Premier League.

Collins’ final appearance saw him don the captain’s armband for the last few minutes of the Hammers’ 3-1 Premier League win over Allardyce’s Everton on 13 May 2018.