Goals missed by sneaking out early

Posted by Sean Whetstone on September 29, 2017 in News, Whispers 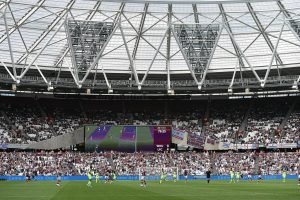 Research has shown that the average Premier League football fan ducks-out of home games seven minutes and 37 seconds early to avoid the hustle and bustle of leaving the stadium and the inevitable traffic getting away from the ground.

The findings, from money saving website Voucherbox.co.uk, reveal that the average Premier League fan missed eight goals by leaving early last season, representing an average wastage of £72.63 of a season ticket price, based on the share of goals missed.

Already this season you would have missed two home goals by leaving early in just three games played at the London Stadium.  Arthur Masuaku scored in the 93rd minute of the Bolton cup game and last weekend Cheikhou Kouyaté scored in 87th of the Spurs derby.