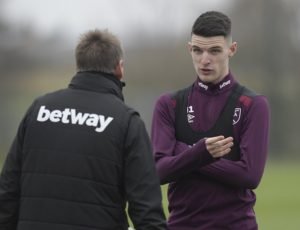 Gold believes the former Manchester United midfielder’s damning comments on aspects of the Hammers star’s ability and dismissed them as “arrogant, outrageous and unfair” when aimed at a 20 year old who admits he’s still learning the game.

Speaking exclusively to ClaretandHugh Gold said: “Keane needs to get over it. Declan made his choice and I think that is what’s behind it as far as Keane is concerned.

“It’s pretty shameful when a former professional talks the way h did about a young man. It was low, outrageous unfair and  arrogant to pick him out of all the England players.

It wasn’t even an analysis of the boy who is 20 years old who has barely started his career in the international team for God’s sake.

“This isn’t the first time he’s done it. In a previous game he said he should be sitting in the studio with the pundits rather than being on the pitch. Shocking! Declan has chosen to play for England and Roy Keane needs to get over that.”