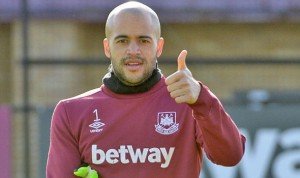 Darren Randolph has signed a new four-year contact with the Irons killing speculation that he could be on his way to Southampton.

After a great Euro 2016 by putting pen to paper at the Hammers’ new Rush Green training base earlier today.
“I’ve had a good first year at West Ham and this is another positive thing to happen to me at the end of a good first season and a good summer with Ireland.

He told the oficial site: “It has gone better than I could have ever expected at West Ham since I joined last summer, playing as many games as I did and then starting for Ireland in the Play-off and at Euro 2016.

“Signing a new contract means I want to stay here for a long time and be part of what is going on with the Club, moving into a new Stadium and a new Training Ground – it’s all very positive and exciting.”

One comment on “Great news as Randolph gives thumbs up”