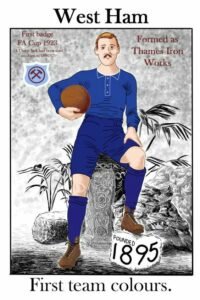 An article in the Thames Iron Works Gazette read “Mr. Taylor, who is working in the shipbuilding department, has undertaken to get up a football club for next winter and I learn that quoits and bowls will also be added to the attractions.”

Fifty would-be players paid half-a-crown for a year’s membership, and Taylor spent the summer arranging the fixtures for Thames Ironworks F.C. and their reserves. Before the Irons played their first game, Taylor returned to refereeing, handing over organizational duties to Ted Harsent, who became the first club secretary.

Thames Ironworks took over the tenancy of The Old Castle Swifts’ Hermit Road ground in Canning Town until their eventual eviction in October 1896. They would briefly play at Browning Road in East Ham, before moving to the Memorial Grounds, a stadium which was situated close to where West Ham station now stands. The ground was built at Arnold Hills’ own expense, costing £20,000.

West Ham will mark the Anniversary on Monday with the launch of special celebration kits for 2020/2021 season plus other content on their digital.

← Zaba: a man to remember …Ngakia: Yuk!
Ngakia could end up a Baggie →
Click Here for Comments >