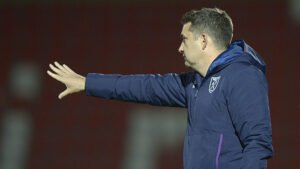 West Ham’s under 23 lead coach Dmitri Halajko hopes and believes his players will be inspired to new heights when they meet Derby County in tomorrow night’s Premier League 2 International Cup at Pride Park.

Unbeaten in the League this season, the Hammers youngsters meet the Rams youngsters in a quarter final clash which could – should they win through the competition – be the icing on the cake of a superb season.

They have reached this stage for the first time in the competition’s six year history but this is a difficult tie against a side currently in  fourth place in  Premier League 2 Division One – making them the highest-ranked English side remaining in the competition.

But that should hold no real fears for the young Hammers who have swept aside virtually all the teams put before them during a season of near unparalleled success.

And speaking at https://www.whufc.com/news/articles/2020/march/09-march/dmitri-halajko-derby-quarter-final-west-ham-u23s-biggest-game-yet Halijko said: A really big game. A quarter-final in the Premier League international Cup, a European competition, is a great occasion.

“Playing at another first-team stadium, Pride Park, against a team that’s doing extremely well in the league above, is a big match and we can’t wait for it.

“Derby have got a really good crop of young players at the moment. They’re in the top four of the league above, and also their U19s have qualified for the last 16 of the UEFA Youth League, so they’ve got a real good crop there.

“It’s going to be, quite possibly, the toughest game we’ve had all year.”

“It’s a different type of test for sure,” he explained. “We have to go there and get a result.

“We always go to try and dominate and win every game, to try and be on the front foot for every game, so we’ll certainly attack the game. We wouldn’t attack it any other way.

“Hopefully, we’ll be going there to get through to the semi-finals.”