Posted by Dave Langton on November 30, 2022 in News, Whispers

West Ham have been linked with a surprise move for Everton defender Michael Keane.

90min reports that the Hammers could explore a move for the centre-back in the January transfer window as the club look to reinforce their back line. 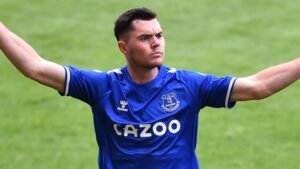 Of course, we have reported that there isn’t a great deal of money available for boss David Moyes to spend.

But the Toffees could be willing to move Keane on; he has only made one Premier League appearance under Frank Lampard this season.

90min makes it clear that any move would hinge on the potential exit of Craig Dawson, who almost joined Wolves in the summer.

Keane has played for England 12 times and has been with the Toffees since 2017; in total, the defender has made 189 appearances for Everton since his arrival from Burnley.

It remains to be seen where Moyes looks to strengthen the squad, if he is given the opportunity in January.