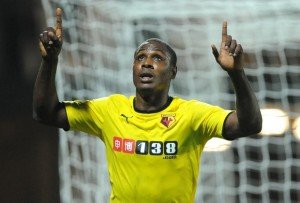 West Ham will test Watford’s resolve with a £20 million bid for striker Odion Ighalo in the summer reports claim this morning.

The 26-year-old has been in good form this season, scoring an impressive 13 goals in the Premier League. Despite Quique Sanchez Flores’ determination to hold onto Ighalo, a £20 million offer could tempt Watford to cash in.

Ighalo is the latest name to be linked  to the Irons after the club’s Boleyn Insider told Hammers fans that the club plan to sign a 20 goal striker in the summer.

The insider wrote last week “These are certainly exciting times with the move to the new Stadium during the summer and I have been told that the Club are already putting plans in place to make a big move for a proven and established striker at the end of the season who can score 20 goals and help take them to the next level.”