Hammers looking for favour from Spurs

West Ham have been linked with a loan move for Spurs and former Middlesbrough defender Djed Spence according to a report from Football London.

It is believed the Hammers as well as Bayer Leverkusen, Southampton, Brentford and Crystal Palace are all interested in the wing back who has been made available by Tottenham.

Whether West Ham will be able to negotiate with Spurs remains to be seen. The two clubs don’t have the best of relationships at boardroom level, and negotiations have been strained in the past. 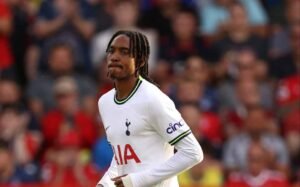 Spence has been surplus to requirements to this season and a loan is seen as the best thing for the 22 year old’s development. He featured prominently at Nottingham Forest last season whilst on loan, and caught the eye of the recruitment team put into place by chairman Daniel Levy.

Unfortunately for Spence, manager Antonio Conte doesn’t appear eager to utilise his prodigious attacking talents. The former Middlesbrough graduate has barely featured for Spurs this season, despite winning Championship young player of the season during the last campaign.

3 comments on “Hammers looking for favour from Spurs”