Hammers missed out on promising left back 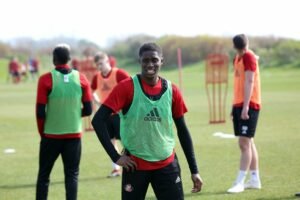 According to reports West Ham missed out on teenage left-back Kokolo Williams who signed for Middlesborough instead.

Williams joined Sunderland three years ago and was a regular for their Under-23 side in the first half of the season but was told he wouldn’t be offered a new deal.

However, according to the Daily Mirror, Boro weren’t the only club keen on the teenager with Bayern Munich, Napoli, West Ham, St Gallen and Fulham all said to have been tracking the youngster’s progress and had an interest.

Williams, who made nine appearances in a loan spell at Darlington last season, will initially feature for Boro’s Under-23s side when football resumes after the English football suspension.

Boro manager Jonathan Woodgate assigned the 19-year-old up on a  two-year-deal, with the former Monaco youngster initially linking up with the Academy but Woodgate has high hopes he can break through to the first team.

David Moyes will continue to monitor his progress at Middlesborough as he is the type of player he wants to sign to lower the average age of the Hammers squad.