Posted by Sean Whetstone on September 25, 2016 in News, Whispers 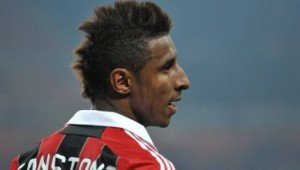 Daily Mirror journalist Neil Moxley claims that West Ham have been offered the services of left back Kevin Constant who is a free agent.

Moxley claims: “The Eastenders have also been offered free agent Kevin Constant. The ex-AC Milan defender is training with Nice after failing to get his six-month contract with Bologna renewed. Constant, 29, is hoping to land a deal with a Premier League club and West Ham have been contacted, following £6m signing Arthur Masuaku’s shaky start to his Irons career and subsequent injury.”

The French man spent his early career in France playing for Toulouse and Chateauroux before moving to Italy signing for Chievo in 201o. He joined Milan in 2012 walking off the pitch in 2013 during a game after suffering racial abuse from opposition fans. He later moved to Turkey and Trabzonspor in 2014.

Constant returned to Italy in February 2016 on a temporary six month contract with Bologna which they failed to renew.