Goalkeeper Joseph Anang has been recalled by West Ham from his loan spell at Derby County as he continues his recovery from injury.

Anang joined the League One club in the last transfer window but he has not made his debut yet, due to a number of injury issues. 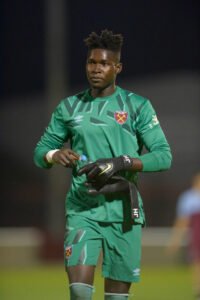 Derby boss Paul Warne has now confirmed that the Irons have taken the decision to bring Anang back to the club, temporarily, to help him deal with his current fitness issues.

Warne has confirmed that Derby did not get a say in the decision, but there is an expectation that the goalkeeper will eventually go back to Pride Park and look to play regularly.

As per Derbyshire Live, Warne said: “He’s on the last stage of his recovery. West Ham have pulled him back for two weeks to assess him. He is a big part of their football club.

“Respectfully, we have to go with what they want. He isn’t in a state to play. He’s been doing a lot of ball work which has been predominantly feet.”

Anang has won caps at England U20 level and he has been on a variety of loan spells during his Hammers career, playing for Stevenage and St Patrick’s Athletic before the move to Derby.