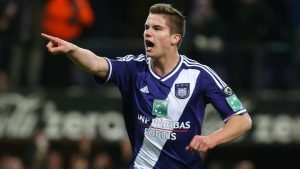 Anderlecht have made it clear that only “an insane bid” will tempt them into selling Leander Dendoncker  this January.

The Hammers are reported to be heavily into the 22 year old but coach Hein Vanhaezebrouck appears determined to hold onto him and sell him at the high end of the market in the summer.

United themselves are reported to be keen but the Hammers are keen with some reports saying a £25 million bid is on the way.

But his coach said: “He can only leave when an insane bid comes in. Over the next six months he has to show his very best level and then we can work towards a top transfer in the summer.”

5 comments on “Hammers told to launch “insane bid” only”