Hendrie to debut against Samuelson today

Posted by Sean Whetstone on January 16, 2016 in News, Whispers 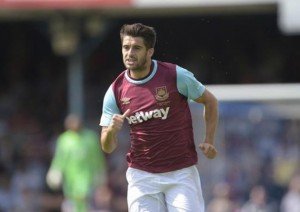 The left-back will immediately start with Phil Brown’s side and looks certain to start the game at Peterborough United on Saturday defending against Martin Samuelson silky skills also on loan to Posh.

Hendrie who is a Scotland Under-21 international, was signed by the Hammers last summer from Hamilton Academical.

The defender, who trained with the squad for the first time yesterday spoke exclusively to Southend’s club website saying he was delighted with the move.

“So far it’s been great, the boys have introduced themselves to me well.

“I’m just happy to be here, and get some games under my belt and fire us up the league”.

Southend Manager, Phil Brown, shared in Hendrie’s pleasure in getting the deal over the line, especially in the absence of injured full-back Ben Coker.

“He comes here making his English debut, having not played first team football since he left Hamilton Academical.

“I spoke to his former manager, Alex Neil, last night about him, to ask about the type character we’re bringing in.

“He says he’s a solid character, reliable, got bags of energy and probably his biggest asset will be his legs, as he can run all day.

“He brings a lovely left foot to the party, as Ben Coker does, so he’s got a great opportunity to get his career going in England at Southend United.”