How we rated the Irons at Brighton

Fabianski: A game he will want to forget. Entirely responsible the critical goal which gave the home side a lead and had no chance with the other two. Did release the ball quicker than at many times this season but not his day at all 4

Dawson: I make him and Zouma responsible for the third goal as neither got near Welbeck from a corner, He’s been a near ever present this season and looked weary but he’s certainly worth a 6

Zouma: Still the subject of much jeering but reacts as calmly as he did at the start of it all. By and large a reasonable game although was made to face some very slick passing and movement. Didn’t always cope 6

Cresswell: Slow start with one or two errors thrown in but grew into it and but for a great block might have had a goal at 2-1. 6 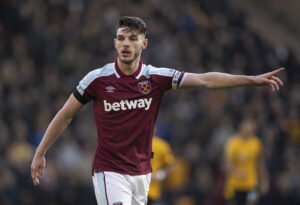 Rice: Clear man of the match AGAIN. A near faultless display and the drilled passes to the left and right wings were bang on the money. Positionally he is instinctively on it – fine game 9

Soucek: For the first time he looked incapable of getting up and down at pace. The man has played 54 games and was made to suffer against the slick Brighton midfield 4

Lanzini: Battled hard but couldn’t provide the much needed creativity the Hammers were crying out for. Neat passing and did his bit tracking back and defending although found out now and again 5

Fornals: The usual top work rate after so many games this season  but that showed at times with some sloppy passing and approach work. In  fairness he got things moving now and again 6

Bowen: After such a stellar season we were exciting a big finale but he had little influence on a game where were usually second best 5

Antonio: Stupendous goal out of absolutely nothing but his touch so often lets him down although he will always be a handful when he breaking forward 6

Yarmolenko: Probably his final game in claret and blue but was sadly anonymous 4

Johnson: On late with the other two – no rating

Noble: He received his final game minutes and one wonders why he is retuiring. Did little to speak of but never out of place. Same as Gonzo last week 16

6 comments on “How we rated the Irons at Brighton”