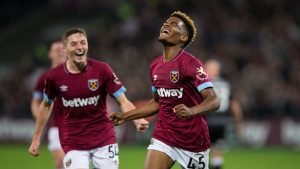 West Brom striker Charlie Austin has been around long enough to know a player when he sees one.

The 30 year old has scored goals for fun at Burnley, Queens Park Rangers and Southampton before joining Slaven Bilic’s Championship outfit in the summer.

So far he’s added just one goal to the 102 he managed at his previous three clubs whilst getting a close up view of the in loan Hammer at The Hawthorns.

The 21 year of Iron has managed four goals and thee assists in nine games and has made a big impression and fans and players alike after Manue Pellegrini sent him out to top of the table Albion. 111

And Austin has been greatly impressed with Diangana over the  who signed a new long term last season after forcing his way into the Hammers first team and making a total of 22 appearances.

It’s a move that is working out well for the player and Hammers as he becomes a widely noted player and gains much needed regular game time.

And Austin talking to the local newspaper Express and Star talking about Grady and Albion’s Matheus Pereira said simply: “Grady and Matheus are fantastic players and they are only young.”