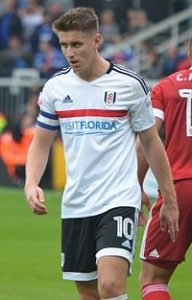 West Ham have tabled a new and final bid of £17 million for Fulham midfielder Tom Cairney in an attempt to test the West London club’s resolve.

Fulham has previously told West Ham that they value the player at £40m and won’t accept a penny less but in reality, were hoping to attract bids as high as £30m.

West Ham think their valuation is ridiculous and point to the current record transfer fee for a Championship player is £30m and that is what Spurs paid Newcastle with add-ons for Moussa Sissoko.

In joint second place, Everton paid £25m for Jordan Pickford last season from Sunderland while Liverpool also paid a reported £25m Newcastle midfielder Georginio Wijnaldum to make them the joint second most expensive players to come from a Championship side.

If the bid of £17m for Tom Cairney is accepted today he will become the fourth most expensive transfer fee in the history of second-tier league.The player himself is said to be keen on the move and started following Mark Noble on Twitter while his girlfriend’s social posts also suggest she is keen on the move to West Ham.

2 comments on “Improved bid tabled to bring in midfielder”