Heroic Hammers goalkeeper Adrian will hold talks with the Hammers about a new long term deal at the end of the season. 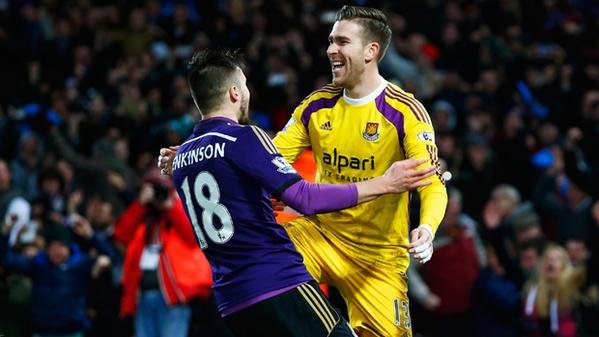 The FA Cup replay-winning Irons stopper’s iconic status went to a new level as he contemptuously threw away his gloves before pumping the winning spot kick past fellow Spaniard Joel Robles.

The psyching-out process was magnificent given that the Everton stopper had just missed his spot kick to set the shoot-out up for the Irons.

Adrian is in magnificent form and has already drawn the inquiry from Spanish team Vincent Del Bosque as to why nobody is talking about the former Real Betis keeper.

And this morning the club revealed that they will be holding talks about a contract extension at the end of the campaign.

ClaretandHugh was told by a top club insider: “Hes got three years left on his contract, but we’ll be holding discussion with him at the end of the season.”

← The Hammers Ratings v Everton
Poll: Was last night the most exciting game ever? →
Click Here for Comments >