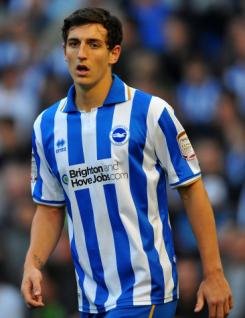 The Hammers will refuse to be held to ransom in talks this week with the central defender’s advisers and are very keen on the Brighton-born 6ft 4in 22 year old .

A Hammers source confirmed the player as a possible target to ClaretandHugh declaring: “Obviously given the situation we need to be looking at our options and Dunk would be prominent among them.”

Dunk is a graduate of the Albion Centre of Excellence and was called into the England under 21 set up a couple of seasons back.

However the Hammers will be forced to pay top dollar of around £5 million to get the player who recently signed a new four year deal with Albion.

It was difficult to make a move in the summer with the wage bill as it was given Reid’s presence in the squad.

His wage would be around the same as  Reid who is currently on £25k a week with our source declaring:  “He’s one of the best defenders in the Championship.”

So far this season the defender has scored five times in 14 appearances.