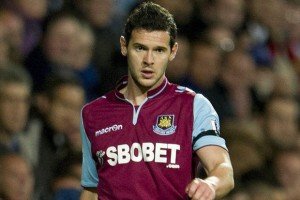 Matt Jarvis will not be allowed out on loan this month despite rumours of interest from promotion-seeking Championship club Ipswich.

With the Hammers short on numbers, Jarvis is seen as a key member of the squad and a source said there was no chance of the winger being let out on loan.

Rumours had been circulating in Ipswich that his former Wolves boss Mick McCarthy was keen  but a Hammers source told ClaretandHugh: “There’s been no contact and it’s difficult to see how they could afford him.”

With the Tractor Boys in second place in the Championship, Jarvis would make an ideal signing but the Irons are adamant it won’t happen.

A source told ClaretandHugh: “We couldn’t allow it even if Ipswich could afford to do a deal. We need Matt – he’s very much part of things at the moment.”