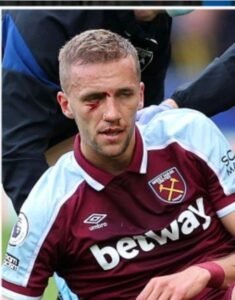 David Moyes has been forced to pull Tomas Soucek out of tonight’s game with our understanding being that the midfielder has tested positive for covid.

And the team includes several players who are carrying knocks as the team takes on relegation threatened Norwich City in the rearranged fixture.

However, two or three are being forced to play through the pain barrier as the team look for three points to lift them back into fourth place.

Aaron Cresswell has returned from his lengthy absence with a back injury and the manager has named four under 23s on the bench.

Given that we included seven in the squad for the match against Dinamo Zagreb these are now seen as regular first team players.

There were concerns this morning that two or three of the players named in tonight’s team wouldn’t make it but instead they will play on – Craig Dawson being one – despite their ‘injury ‘ issues.