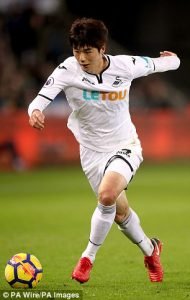 Ki Sung-Yueng has dismissed the idea of joining West Ham on deadline day, believing he is better off at Swansea City saying he doesn’t think West Ham are any better than his current team WalesOnline claim.

The South Korea international has been linked with a swap deal to the London Stadium that would bring Andre Ayew back to the Liberty Stadium.

Swansea have made a £16m offer plus an additional £2m in add-ons to bring back Ayew who would play alongside brother Jordan before the window slams shut.

The former Celtic midfielder’s involvement in the victory over Arsenal would suggest he is set to remain a Swansea player. And he himself said he has no intention of moving to Swansea’s relegation rivals.

Sung Yueng said “I have already said my concentration is to survive in the league here and my contract is until the summer and we are starting to play better, What I want to say is I want to be here and if Swansea wants me to stay here and be in this team then I can help this team stay in the Premier League. It is a difficult time but I don’t think I am going to leave. I don’t need to move. I don’t think West Ham are better than us.

“We are fighting with them to avoid relegation so I think I want to play in my team-mates. I want to stay in the league at Swansea, I think me playing this game means I will stay.”

← The case for and against loan players!
Oxford heading for talks →
Click Here for Comments >